We’ve all heard about amino acids, but what are they really? Without them life on earth would cease to exist. They play an essential role in various critical functions of plants, animals and all other organisms. We’ll take a look at the role amino acids play in plant development, but let’s first take a look at what they are exactly.

Amino acids are basically the building blocks of all life. They’re organic compounds that, together, can form proteins. We currently know of 500 different amino acids, of which there are 20 (21-23 according to some scientists) essential amino acids  needed for life. The term “essential amino acids” refers to our human needs. Because our bodies can’t synthesize these amino acids we have to get them from our diet. Plants, on the other hand, can synthesize all the amino acids they need themselves! However, these are fairly energy-intensive processes. In other words, feeding your plants L-amino acids leaves them with more energy for other processes.

Not all amino acids are created equal! The most important thing to understand about amino acids is the difference between L-amino acids (left-turning) and D-amino acids (right-turning). The two are essentially mirror images of each other, this is called chirality.

Science is far from uncovering all the details surrounding amino acids (or even biology in general). What we do know is that nature (life) has decided that the only type of amino acids it will (or can) use is, with very rare exceptions, the left-turning variety, or L-amino acids. In a natural setting L-amino acids are produced through a process called “enzymatic hydrolysis”. As bacteria grow and reproduce in the soil, they give off digestive enzymes that break down large molecules such as proteins into smaller molecules such as amino acids. Even though this process can be reproduced in an industrial setting, not many fertilizer companies choose to use enzymatic hydrolysis to produce amino acids.  This is mainly because it’s quite an expensive process requiring specialized equipment.

The functions of amino acids in plants are almost limitless and science is constantly discovering more. We call the effects of L- amino acids (and other non-nutritive substances) on plant growth “bio-stimulation”. Bio-stimulation is essential to plant growth. NPK agriculture however, views plants as machines and plant feeding as a chemistry experiment. In reality plants need so much more than simply the standard 16-17 mineral elements. Various processes in the plant are influenced by L-amino acids, like hormone and enzymatic functions, structure building, reproduction, immune response and nutrient transport. Feeding L-amino acids to your plants make them better equipped to perform these functions, making a healthier and more nutritious end product while limiting negative stress.

Most commercial fertilizers contain nitrogen in the form of nitrates (NO3) and ammonium (NH4) in high quantities. Plants readily use both forms, although these forms of nitrogen do bring some problems with them. There is however, another, less discussed source of nitrogen. Perhaps the lack of discussion is because there is still a lot of research needed on the topic. L-amino acids (and other organic materials) contain organic nitrogen.  Once inside the plant, the organic nitrogen is released and used by the plant. Part of the nitrogen taken into the plant is used for protein and amino acid synthesis. By providing nitrogen in bioavailable form the plant requires less from nitrates and ammonium. Why does this matter? Well,  as with anything, overdoing any one aspect can cause problems elsewhere. Excess nitrates generate faster growth, which in turn causes cell elongation. As the rapidly growing cells form, the cell wall is stretched and thinned. This weakens the tissue, making it an easy target for pests and other invaders. You can see this with many field crops, like corn—fast growth but weak plants. The excess nitrates also interact with other important nutrients in the soil, potentially causing deficiencies. 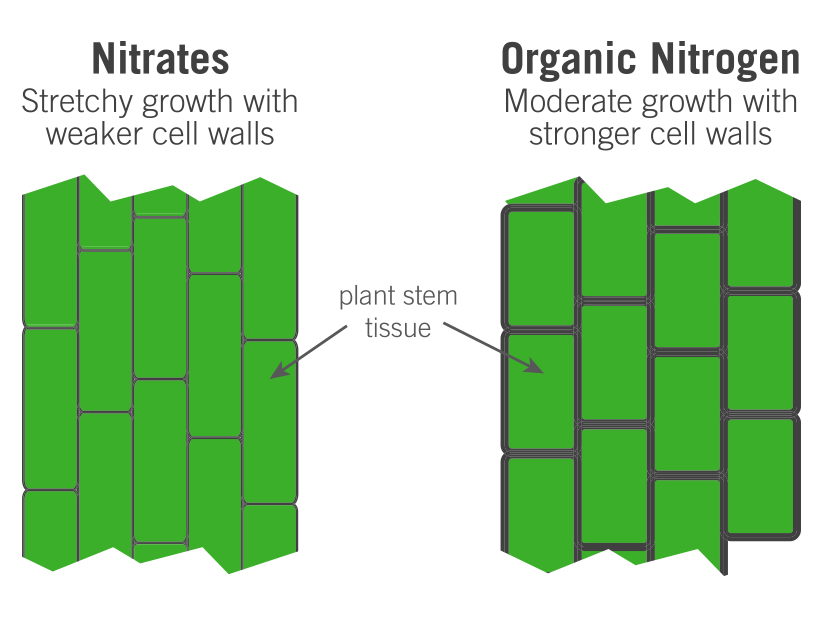 When nitrates are in balance and nitrogen is also provided by organic sources cells grow more naturally and with a sturdier shape. This results in a stronger plant, healthier cells, with more resistance to stress and attack.

One of the most significant roles played by amino acids play is enhancing the bioavailability of nutrients. Certain nutrients are not absorbable by plants due to their molecular structure, ionic charge etc. L-amino acids (and some other organic acids) effectively “pack” these unavailable minerals so that the plant can absorb and transport them. The process of “packing” nutrients in acids is called “chelation”.

Chelating with amino acids increases the amount of minerals available, in a nutrient solution or growing medium, for uptake and dissemination throughout the plant.